Letter to H.R.H. King of The Netherlands 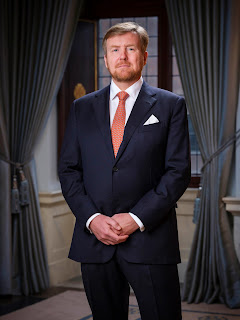 I am writing this letter to you because I want to protect and preserve the freedoms acquired and therefore the happy life of the Dutch people. The other day, there was a survey which showed that young people in the Netherlands were the happiest on earth. I am writing this letter to you because I trust you. Your recent performance with our Queen when you expressed shame about your unwise trip to Greece made me feel good. I know that Youp van’t Hek vilified you and your family for it, but as an ethicist I saw that you expressed sincere regrets. As a systems thinker, I have learned that there are two kinds of errors; one of commission and one of omission. The first is an ordinary mistake that we all make, but that is one that you can correct by repeating correctly the action that caused the mistake. But a mistake of omission is the biggest, the worst and the most dangerous mistake a human being can make, because it cannot be replicated because such a mistake is caused by not doing what one could have done and therefore should have done. I am talking about deontology, which means the principle of duty, in other words how one should behave so as not to harm human life, nature and social cohesion. So I ask you, on behalf of all our fellow citizens, including those who are meekly following the political class because they are numbed and frightened, not to sign the emergency law. It would be the biggest mistake you could make and it would delete 400 years of freedom, rights, the Constitution and many international treaties on human rights. You would have to ask yourself these questions; who would benefit from this? Cui Bono? And 'Quis custodiet ipsos custodes?': who is guarding the guards?

Not just me, but many thinkers, journalists, philosophers, doctors, lawyers, professors, entrepreneurs, independent business owners, freelancers, and many others are ignored and accused of conspiracy theories, but that is untrue. They come up with well-founded arguments and evidence that such an emergency law will do more collateral damage than it will prevent. This emergency law is not utilitarian; meaning the greatest good for the largest group, but it will cause exactly the opposite.  Another argument, historically evident, is that the curtailment of freedoms will cause physical resistance. It will bring about a complete 'entropy' (disorder). People are already taking to the streets. This is, in fact, easy to calculate physically. Because this law will have to be implemented by force, it immediately means that it will never work because tolerance can only be achieved by reason and must therefore be earned by reason and not by the bludgeon. There is already talk of suppressing information that contradicts the purpose of this law. As a result, there will be more and more pressure (read censorship) to stifle contradiction, which will then cause even more resistance.  Those who have forgotten history are condemned to repeat it', wrote George Santayana. So if you allow this to happen, you are not doing what you should and could have done, a perilous error of omission. Your own position will also be jeopardised, because if the people lose their minds through despair and hunger, there will be no control, not by the police, not by Boas (civilian security personnel)  or even the army, because the people are always with more. Nature teaches us that living systems can only survive if they communicate and exchange information. Your own body, a plant, our nervous system or social cohesion depends on communication. The Netherlands, as a living system, will only be able to survive if communication and a free, open way of exchanging information through CONVERSATION, can remain intact, i.e. if a happy free state can continue to function. This is not an idea, but a scientific truth. Living, open systems that are no longer allowed or able to communicate are no longer able to adapt and die. This emergency law is a dense, closed system, so it will not be able to learn or adapt thus it  will die a terrible death, but before that happens, the collateral damage to people and the homeland will be enormous.

Please? Your Royal Highness, William of Orange, your ancestor would be turning in his grave if he had observed our dire situation today. He fought for us against the Spaniards and gave us the Golden Age where, through freedom of speech and freedom of enterprise and pleasure, people could develop themselves as thriving citizens. Today's political power does not appear to possess that capacity for thought. They have entered, as it were, into a mass psychosis known as mass formation, a collective cognitive dissonance, and you know, fear is a bad counsellor. Through arrogance, they imagine that man can control nature by taking draconian measures. Once again, this is scientifically impossible.

Neither a politician, nor you as King, is above nature and can 'regulate' or 'control' a virus through regulations and laws.  Even a politician, a king or me as a citizen can and will only survive if we cooperate with nature (the virus) and treat him as a bringer of good news because he gives us, as humans, a final warning; either you restore the ecological balance or nature will take over. You also know that the earth can do without the people, but the people cannot do without the earth.

PS. If you do not want to do it for us, please do not sign this law for Your Grace, your children and your grandchildren. You are now our last hope, the only human being, our King, who can prevent further damage to your country and your beloved and loving citizens.

With esteem and sincere commitment,