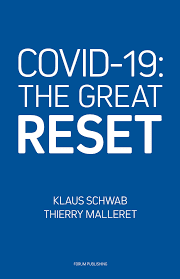 You can’t judge a book by its title, so I took a couple of days to read this book by Klaus Schwab and Thierry Malleret of the World Economic Forum.

When I started reading it, I could not help noticing that most of the story had to have been written before the Covid 19 pandemic had started, despite the numerous reminders in the book that it was written in June 2020. The ideas, the historical referencing, as well as many observations throughout it, seemed to already have been listed, researched or at least anticipated and described as if it were a reaction to the dreadful effects of this killer virus. This made me aware of the potential intent or the motivation for this book. Although the book highlighted numerous global risks such as climate change, biodiversity loss, ecological devastation, drinking water pollution and so on, they originated from the WEF Global Risks Reports which I have been researching for the last decade. These environmental and human crises had not been mitigated prior to the Covid 19 outbreak, but were fundamentally caused by those who support the World Economic Forum. Their conclusion is that suddenly the Covid situation made them grow a consciousness to create a better world by The Great Reset, which, when you read between the lines, would only by governable by the Private Sector. But wait a minute, were those that represent this private sector, not those who caused the Corona Virus Crisis in the first place?  When you read this book blame is being put on the Virus, but not on the historic causality that caused the virus to be able to emerge in the first place. The true causality is not the virus but the relentless pursuit of financial gain and political power which caused and keeps on causing systemic destabilization of natural habitats, destruction of bio-diversity and social cohesion.  It is not the virus, but endemic poverty thru a widening wealth gap. The authors write that capitalism helped alleviate hunger and poverty, but for whom? The military industrial complex, the  pharmaceutical manufacturers, GMO industry, the polluting energy sector and other non sustainable industries have done not enough to save lives, the environment or society. But now, as we are made to believe, will they embark on a cooperative, stakeholder ( including you and me) voyage to reset the world according to their sudden, benevolent awareness? There was no talk about the structural first cause for the global risks which in my view is the current corrupt financial, political and economic system. This seems not to be discussed in the book, because those who would benefit of the Great Reset directly, would lose if a different, more equal financial system would be implemented.

Conclusion; I did like the book and was almost convinced that this Great Reset could indeed work and be the Godsend solution to all of us and live a happy life ever after. But we have to ask the two most important questions: Cui Bono? and Quis Custodiet Ipsos Custodes? Who gains and more importantly ‘Who guards the guards?’ Will the peoples of the world accept their sovereignty, their nationalities their democracies, their freedoms to be given up in order to serve those in the private sector who are actually responsible for the global crises and propose a technocratic surveillance state run by Artificial Intelligence? Throughout the book a sense was felt that most problems can be solved by dehumanising forms of technology, causing loneliness, separation through social distancing. But what about by love, by understanding, by compassion, by conversation, by education, by rehumanisation?