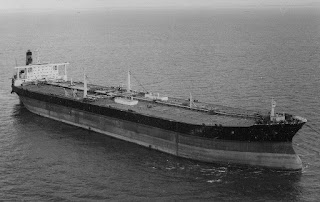 33 Years ago There's rumors of war Men dying and women crying If you breathe air, you'll die Perhaps you wonder the reason why?  This is how the song 'Are you ready' commences. The song was a hit by a band called Pacific Gas and Electric in the sixties of last century. I was ready in the eighties to work in all kinds of places, even in war zones like the Persian Gulf. The name of the ship was 'Hawaii'  and it was hit and destroyed by an Exocet Missile which was fired by the Iraqis during the first Gult war between Iraq and Iran. This news message was hidden in some obscure newspaper:  Th e 372,201 dwt Liberian tanker Hawaii, was loaded with 320,000 tonnes of Iranian crude oil, when she was attacked by an Iraqi warplane about 60 mi South of Kharg Island in lat 28.20N, long 50.50E at 0310 am on March 29 1986. The Exocet missile struck her in a starboard fuel tank, causing a major fire in the aft section. 31 man crew.  I was on board a
Een reactie posten
Meer lezen
Meer posts