An important message about mRNA by Jeremy Campbell and me... 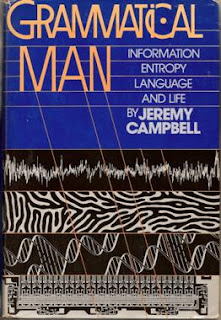 An excerpt of this book.

Certain parts of the DNA text are structural. In other words, they code for a specific functional product. They are instructions for making proteins and the message is on the literal level, like a recipe for shortcake. The message means exactly what it says. But other parts of the text are not to be taken so literally. These may consist of a kind of commentary on the structural genes, or contain hypothetical recipes for proteins which are not manufactured, or programs for editing and rearranging structural sections. They may represent information about information. If this is so, it would be a quite startling departure from earlier, simpler ideas about the gene. Evolution is a more complicated process than was formerly supposed. Chance mutation alter the genetic message by replacing one letter with another, so that the meaning of a sequence is changed. In the case of the structural genes, a mutation may lead to the manufacture of a different protein. However, a mutation in a non-literal part of the text would have another kind of effect altogether, because it would bring about a change in the commentaries, or programs, resulting perhaps in very significant modifications of the organism.

If DNA is an information process and a theory of information exists, then it is reasonable to suppose that scientists can at least make a start of sketching out a theory of living organisms, in the full sense of the word. When symbols of DNA are translated into the substance of proteins communication takes place.

Systems regulating genes are often effected by events in the outer domain of the cell. Also, the programs themselves depend for their functioning on the finely adapted sequences of structural genes, which evolved to their present state of high efficiency over long stretches of time, should not be underestimated. In some cases. structural genes are also regulator genes; they produce protein molecules which are instrumental in switching other genes on or off. The issue with mRNA ordering which is specifically targeted to a type of virus protein, risks the destabilization of the natural DNA sequencing code, which is dependent on all information input i.e. real time communication within and outside of the cell and can't be switched off, because it is a dynamic, living, thus complex system.