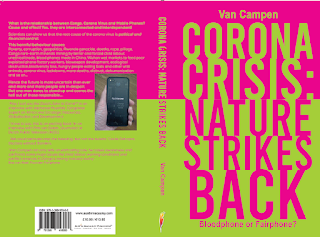 My latest book was published in London yesterday.
The relevance of this story to the current Corona Crisis is striking. Since in 1885 the European countries and the US, the so called ‘civilized’ world got together in Berlin to divide Africa among themselves, the ruthless exploitation, pillage and killing started. This led directly to the current Corona Crisis, so you may say, that it is true that Nature Strikes Back.
In fact, the book is a scientific thriller about a company that chooses to go sustainable. You can read it as a symbol of interdependence of all living systems. If we destroy the environment, the habitat of species, the social cohesion and biodiversity, nature sends a warning in the form of a virus. The virus wiped out just about all profits ever made from conflict minerals. here: https://www.austinmacauley.com/book/corona-crisis-nature-strikes-back
Some readers comments:
We take for a granted the multitude of electronic devices that we use everyday without thinking for a second about the rare earth metals supply chain, which makes these devices possible. Van Campen uses rare earth metal extraction to tell a story of the terrible exploitation of the environment and people that continues in Africa and raises awareness for a path forward to a sustainable world. This all done through an action packed story that bounces between Europe and Africa. I learned much from the book and it made for a great read!

Coltan Fair Trade for the people

It is interesting to read how Van Campen has formed this story based on historic facts and about abuse of Africa, its
People, Its Trade and the Earth. This book is well written and not hard to read and it sets one thinking. Compliments to the writer and curious about the next book!

A powerful and exciting story!

Van Campen tells a fast-paced exciting action story that has a core of truth and sincere outrage at its heart. This book tells a great story, but through the narrative, it also succeeds in educating the reader about several complex global ethical issues that are hardly, if ever, mentioned by "news" media outlets.
I normally read in bed before I go to sleep, and this story had me hooked! Every evening I was keen to go to bed to read the next chapter.