Why 'THE GREAT RESET' plan by the WEF is unattainable! 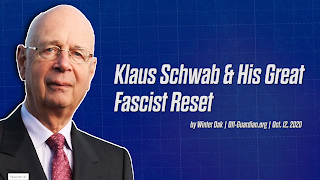 When you read the messages and comments on FB and Linkedin, you know that there is an open plan that is designed and directed by the World Economic Forum. This private company founded by Dr Klaus Schwab about 50 years ago has grown into an influential think tank. Our political and industrial leaders travel to Davos every year to participate in the WEFORUM.  Those who have sufficient financial resources can then participate. NGOs also send representatives to talk to them. It is a meeting place for the rich and famous, including the leaders of the G20 and other countries. It started with the launch of a so-called Fourth Industrial Revolution, which has now turned into 'The Great Reset'. I am writing this blog today in response to a video in which the British Prime Minister Boris talks about a Brave New World - read The Great Reset, in which technology is propagated as the solution to all world problems; so everyone vaccinated, nano-robots in our blood arteries that will save us from infections, brain implanted to shape a kind of super race, total transparency of thoughts and actions through the Internet of Things and 5G, you name it. This objective is not a secret or a conspiracy, no, it is open politics and it is the WEF's plan which is now being implemented without skepticism by neo-liberal governments, which are already applying censorship because the Corona crises have created an opportune democratic vacuum. You do not have to look far to observe a general change towards more power, control and, as a result, the necessary restrictions on civil rights and freedoms in our society. If scientific evidence such as flu vaccination, for example, is suppressed to make room for the general acceptance of Corona virus vaccination, then everyone understands that there is an ulterior motivation to do so. Fortunately, there are thinkers and scientists who see through this inhumane objective, but they are immediately marginalized while our leaders' call for even more fear to be mongered through lock-downs and fines is becoming louder. A dystopian image, isn't it? Who wants to live in a society where living together has been made impossible and where a dangerous form of book burning and iconoclasm is making people apathetic, willing to give up all opposition? I witnessed a people made apathetic in Romania, but I hope and trust that resistance will continue, through research, knowledge and courage. Yes, I believe that courage conquers fear. We are all going to die, but not because of Corona, but because of the merciless actions of our elite, who are only supporting these foolish experiments by dreaming of money and power. Take the money away from them and they are defenseless or make sure that we as human beings together have more money than they do. But I can tell you something positive, based on scientific research and that is this: This 'Great Reset' cannot and will not be attainable because it can never be attained physically. This has to do with information. A goal can and will never be attainable if it depends on suppressing information because information cannot be separated from reality. This is a universal law of physics. Nature and the universe can only function because information must be used as energy. If nature wouldn't do that, it would fall into entropy and that would mean the end of all life. So a goal to be forced by censorship as a means of shutting information down,  can never be achieved. However, it is a fact that if the Great Reset is the essential goal and therefore has to be enforced it will be causing huge collateral damage which you can understand as 'entropy' meaning disorder. This is not an assumption but a physical effect, calculable and predictable, just look around. Only goals that do use all information are achievable because they allow corrective information and thus can continue to learn and adapt with new, up-to-date information. Technological mastery of us, man and nature, is unfeasible. So, together, we can only attain goals by using our mind and conscience which are not harmful to human life, non human life, social cohesion and the environment. So, from now on, you know that the goals of our governments, the IMF, polluting industries and vaccinating pharma are unattainable. We must expect human suffering and damage to society and the environment which drastically affects our life expectancy. Our free, happy, carefree and joyful life will be as good as over until the entropy is so great that a new balance will emerge from the chaos, but that will take years of bloodshed, mistrust in the form is disorder a.k.a. entropy.