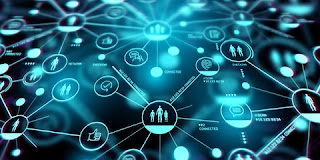 'Information can never be divorced from the physical world.(Khalili, Jim, 2017). Information is not just an abstraction.'

Right people, despite the enormous effort, endorsements of many nations, approval by the United Nations and support of neo-liberal business and industries, the Great Reset can't be reached. You may ask how do I know that and can even predict that? Quite easily: the plan does not comply with the laws of nature nor the laws of physics. To understand the value of information and its equivalence to energy, I will argue that information is equal to energy. I propose that information obeys the same universal laws of physics and forms an essential part of the fabric of all living systems. Energy is needed for living systems to build, move, transport, create, fabricate, live, be sustained, be stable, viable, but can’t do that without information in the form of communication, conversation, cooperation, learning, adaptation and adjustment by way of cognition i.e. the mental and biological action or process of acquiring knowledge and understanding through thought, experience and the senses a.k.a. the process of knowing.  Information is a part of and essential for all living systems, a condition for life and evolution. Man-built organisations, institutions, governments, industries, ideologies, as well as our planet and the universe are living systems. Cognition is not just a human ability but a symbiotic necessity for the viability of all living systems because of their natural interdependence and interconnectedness. By determining that information is a condition for living systems for them to be sustained ethics and social responsibility is information too and are inescapable, deontological conditions for order, structure and beauty and thus for sustainability, mitigating vulnerability and risk.

a.      Negative Interdependence:  Unsustainable
an economic or industrial goal, a personal ambition, production process or political ideology can only be achieved for some, but at the cost of others: people, the environment, society, ecological balance, etc. The protection of the environment, social cohesion, and human and non-human life are secondary objectives.

b.      Positive Interdependence: Sustainable
an economic, industrial goal, personal ambition, production process or political ideology can be achieved for everyone (all stakeholders). Protection of the environment, social cohesion and human and non-human life are principal, central and shared objectives.

c.       Path Dependency
The tendency of a past or traditional practice or preference to continue even if better alternatives are available. Understanding that dynamic adaptability is the very basis for sustainability and continuity, path dependency directly conflicts with that.

Rolf Landauer stated that information is physical (Landauer, Rolf, 1991) and related it to entropy which leads to disorder in systems, describing the measure of entropy in a number of bits which are binary units of information, and confirmed that entropy is information. The process of understanding what information entails starts with the description of the two laws of thermodynamics. Information understood as energy obeys the same laws of physics. 1st and 2nd  law of thermodynamics (Clausius, Rudolph 1865). There are two kinds of processes, heat and work, that can lead to a change in the internal energy of a system. This is the same as saying that any change in the energy of a living system must result in a corresponding change in the energy of the surroundings outside the system. In other words, energy cannot be created or destroyed. Information influences matter and reality. With physical information in the form of feedback as an influencing energy through cognition, processes that use information are adaptive whilst processes that not using this information become non adaptive. Entropy is the measure of order or disorder in a process or living system by the availability or unavailability of energy and information answers to the same law of physics, namely that natural entropy can be influenced by information which is used by our universe and planet to create order and structure.

The universe, a computer, the human body, the environment, businesses; all living systems are information carriers, receptors and or transmitters. The information they carry can be understood as meaning, observed and understood by the human consciousness and processed by his brain. Without the human capability to interpret information and meaning, the usefulness of bits of information, could not have been perceived. (Van Campen, 2020). Information gives energy its functionality.

What the World Economic Forum and their political and business friends overlook that they are an intrinsic part of this information. They influence processes in an entropic way because they believe that information such as about the negative consequences of the Great Reset plan can be ignored. What they don't realise is that no one escapes the laws of physics. That is why negative, correcting feedback is suppressed, but cybernetic laws prevent that, so their goal cannot be accomplished. This is a physical reality caused by a false, reductionist and deterministic perception. Unfortunately this means that until they accept that nature prevents them from enforcing such fallible goals, entropy in the form of disorder, revolt, more deaths, destruction,will persists because force derails natural stability. Years human suffering lie ahead. I  m sorry but I can't give you a happier outlook.  More information on science of reality on www.sustenance4all.com