When you understand complexity theory, you will know that lockdowns can't work. 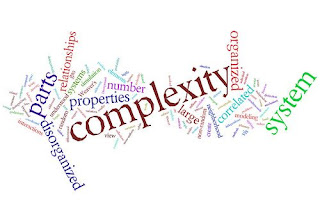 When an organisation, corporation, industry or political process are understood as living systems, their interconnected and interdependent relationships within and outside of their networks change all the time. This complexity, due to dynamic and perpetually changing information feedback loops, can’t be managed by direct causal action (cause and effect reactions) but can only be maximally controlled by steering with that information in real time. Adaptability to constantly evolving changes by using all information directly is needed to ensure continuity and longevity of the living system. Nature works like that too.
Complexity is a consequence of a myriad of unknown factors, relationships and reliance which nevertheless have a direct impact on organisations and can only be ‘controlled’ by learning and actual adaptation in real time. These so-called non linear effects or non causal stimuli from often unknown, but interconnected and interdependent sources, can’t be controlled by old-fashioned linear measures of control such as regulations or compliance, but can be ‘navigated’ by the use of positive and negative feedback, i.e. amplifying or correcting information. Cybernetics is needed here to make sure all information is used. To control a system such as the Corona Crisis, it is wise to use the Law of Requisite Variety, a.k.a. Ashby's Law, to build resilience by obtaining variety in the form of capacity, capability, knowledge, tools and information to be able to respond to risk. When only linear control systems, such as law enforcement, empirical verification, physics, mathematics or iso standards are used, they won’t be able to cover a non-linear or complex reality which consists of a linear (cause & effect) part, but for a larger extent, of a non-linear, non causal or dynamic part, which is much greater. This can’t be known in advance, for example people's behaviour, because it constantly changes due to unforeseen and unknowable actions by the entire, also dynamic, network of which it is a part and on which all forms of organisation are dependent. In short; behaviour of the parts in a network can’t be predicted. Awareness of such behaviour is needed but needs a new, systemic point of view. It is crucial for our survival that we understand complexity and learn how to deal with it. Control systems we have tried such as bank regulation, industrial compliance demand, trade tariffs, ecological restriction, lockdowns, law or even wars, have not been able to maintain equilibrium or homeostasis just like nature does. Quite the opposite has been caused by them; economic, cultural or environmental collapse, poverty, mass emigration, crime, biological annihilation of species upon we all depend, pollution of soil, water and air. Nature works according to cybernetical principles. All we have to do is to learn from and copy nature because we are a part of and dependent on it. Stephen Hawking was looking for a Theory of Everything, which we found; 'Everything is Information'.