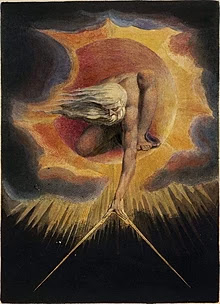 In her biography of William Blake (1970), Kathleen Raine describes his art and poetry whose value became known after his death.
The universe of imagination is unlimited and only seems chaotic by one’s limited perception. Empiricism forces man to limit his consciousness and subconscious perception or inner knowing that does not allow boundaries. Therefore it is obstructing to an infinite and boundlessly evolving state that is not easily understood by limited dimensional awareness and thought.


William Blake shows that Urizen (Reason) acts like a God, holding a pair of compasses. In The First Book of Urizen (1794) he becomes the self-deluded and anxious demiurge (creator), engaged in the enormous labours of imposing his ratio of the five empirical senses (sight, smell, hearing, taste and touch). Katleen Raine, the scholar biographer of William Blake says in one of her last documentary interviews named ‘God is the Imagination’ that Blake called for a re-internalization, a reopening or return to a world of eternity, an inner, spiritual world in which a materialistic culture or civilization had been denied and excluded.  Blake determined man as a spiritual being and challenged reason. Reason had been throned as divinity in the times of Notre Dame Paris and the French Revolution, which led to human hubris and blindness to the simple rules of life. Reason and rationality were used for an industrial revolution, rather than a personal or individual revolution towards freedom. This so-called ‘Mechanism’, or The Clockwork Universe, was partly based on Descartes theory of mechanism, which means that all of nature can be explained by the mechanical motion of all substances. All motion of bodies is due to mechanical impact, like the mechanical workings of a clock (Lavine T.Z, 1984).


William Blake saw that this mechanism was used to control man and said that all the arts of life changed to the arts of death according to his poem Albion, which was the ancient synonym for Britain. Kathleen Rain explained in a metaphor that the hourglass was condemned because its simple workmanship was like the workmanship of the plowman. ‘And the waterwheel, which raises water into systems broken and burned with fire because its workmanship, was that of a shepherd. And in their stead intricate wheels invented, wheel without wheel to perplex youth in their outgoings and to bind to labors in Albion of day and night the myriads of eternity. That they may grind and polish brass and iron hour after hour, laborious tasks kept ignorant of its use. They might spend their days of wisdom in sorrow for drudgery to obtain a scanty pittance of bread, blind to all the simple rules of life.’


William Blake was ridiculed in his day. His work was deemed non-academic and therefore not compatible to mechanistic standards that are still being followed today (Raine, Kathleen, 2003).